13.09.2021
I bought this item and after unpacking it I noticed It is not 2021 wing (v2) but a 2020 wing (v1). Wing I received have windows (as opposed to the wing pictured on the kitefly site). I will not be able to test it on water (using foil) for at least few weeks (maybe months) though it feels nice in my hands. I do like this wing. Not as much as I would like wing v2 which is advertised above. I would not like to return it but I do feel I was cheated in this transaction. Regards, Vedran
zum kitefly Bewertungsprofil
Doreen

For kite: Faster and higher-aspect than the stock Hover Glide H5 wing. Designed for more advanced riders or for foiling in stronger winds. A great upgrade for Hover Glide H5 owners who want an change of pace.

For windsurf: Higher aspect means higher speeds and higher performance than the stock H2 wind foil wing. This is a great option for light weight wind foilers, for those who favor speed and long-distance cruising or those who frequent high wind locations where a larger foil isn’t necessary.

For surf: The H3 wing is a great option for tow-in surfing long rolling swell before it breaks. Its higher top-end speed is a big help in keeping up with swell and running down faces at speed without worrying quite so much about over foiling and breaching. 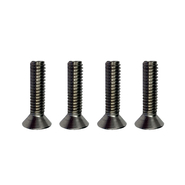